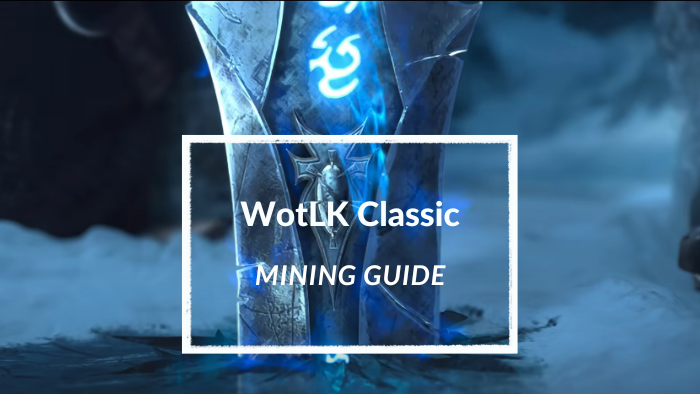 Wrath of the Lick King Classic Mining is an engaging quest from one of the two main gathering professions involved in extended WotLK gameplay. Players need to learn how they can accumulate materials from mineral nodes in raids, dungeons, Outland, Northrend and Azeroth zones. These gathered materials are necessary for players working in different crafting professions such as Blacksmithing, Jewelcrafting and Engineering. However, all the assets from Mining can become standardized and beneficial with Skinning or Herbalism without moving through crafting sides.

The steps of Mining and Leveling are crucial enough to make up your mark. Our WotLK classic mining leveling guide helps to pave your path in the long run. This mining guide covers steps from initial to advanced Mining skills, including well-matched professions, finding trainers, tracing nodes in WotLK Classic, differences between WotLK Classic and TBC Classic, and routes guidance to level Mining. Now, let’s dive right into the guide.

Mining in WoW WotLK Classic is a primary profession for players in which they accumulate mineral nodes. Players can find these materials from different regions, raids and dungeons, which can be used in Blacksmithing, Engineering or Jewelcrafting. However, the Find Minerals tracking ability enables players to locate specific quest items and mineral nodes on the minimap.

The Mining primarily pairs with a crafting profession such as Blacksmithing, Engineering, or Jewelcrafting. These WoW WotLK professions utilize the Smelting process for metal bar crafting in WoW WotLK Classic game. While Jewelcrafters can use the Prospecting method for extraction of gems from ores.

However, it is certainly possible to earn more money through gathering and farming by level two gathering professions rather than those crafting professions mentioned above. When you need a double gathering mechanism, Skinning could be the most preferable option since only one tracking side will be active. If you stuck and need help with your professions, feel free to check out our profession boost services.

Players of opposing factions or corny hostile creatures near ore deposits can often interfere with you on heavily populated servers where there is a clash between factions. Therefore, you should ponder over these best classes to accumulate ores in the Classic Wrath of the Lich King game.

WotLK enables you to thoroughly loot a mineral node in just one tap, unlike the Classic expansions, where you had to tap multiple times.

According to the level of the Mining profession, the player receives a passive stamina buff called Toughness.

Have a glance at the Toughness of six ranks based on the Mining level:

These are three valuable ores that appear in Wrath of the Lich King Classic:

Following is a list of locations of the Mining trainers from Journeyman to Grand Master in WotLK Classic, categorized by Alliance, Horde, and Neutral Trainers.

Depending on how much time you want to devote and the amount of “extra” gold you have, you will have two options for WotLK Classic leveling mining.

The first way is to buy ore from open word farming and the auction to mix leveling. In the open world, the mining skill can be leveled up to 270 without gathering and then to 450 with open world gathering.

The first thing to level up your mining is to buy ores and melt them into bars. You won’t be able to reach level 375 just by melting ores, but you will be able to get around 270 before you have to go to open world and thumb a bit of hour and then melt these to continue leveling, but overall, you will save around 5 to 7 hours doing this.

Gathering in the open world is the second best option. These are preferable routes for players to achieve some specific milestones.

Here your intent is to find Copper Vein nodes in these zones:

Communicate with a Mining Trainer to learn Journeyman Mining once you have reached 50/75 skill.

For leveling range 65 to 125, you will need to find Silver Vein and Tin Vein nodes in these zones:

Learn Expert Mining from a Mining Trainer after reaching 125/150 skill.

Here you need to accumulate Gold Vein and Iron Deposit nodes in these zones:

For leveling from 175 to 250, you will have to focus on Truesilver Deposit and Mithril Deposit nodes across the Azeroth:

Speak with a Mining Trainer to learn Artisan Mining once you have reached the 200/225 skill level.

Note: Upon reaching 350 skill level, stop mining in Outland and start in Northrend.

Move to Northrend and learn Grand-Master Mining from a Mining Trainer after reaching 350/375 skill.

Start Classic WotLK Mining in the Northrend region after getting at least 350 skill level.