You want to get stronger in PoE and you want to be able to afford better weapons and equipment? To be able to buy them in PoE, you need the different currencies. We at CoinLooting offer you the possibility to obtain them for a good price. Don’t worry any more about farming and buy PoE currency on CoinLooting.

In advance, here are some information about the free to play game Path of Exile.

Path of Exile is a free action game developed by Grinding Gear Games. You can play it on various platforms such as Play Station 4, Microsoft Windows and Xbox. This game has an excellent rating of 4.6 out of 5 in Google. In Path of Exile there are different leagues. A differentiation is made between standard, hardcore and the solo self-found League. Each league has their own rules. After the end of each Season League, the characters are no longer playable.

In the game there are a total of 32 unique maps. On each map you can find different unique weapons and armor. So, the developers can also offer you as a player a lot of variety.

PoE has received the best rating of 9/10 on the platform Steam. It was rated “BEST GAME OF 2013” by the players. Especially the multiplayer mode has contributed to this rating. So you can play with more friends, which is of course more fun than playing alone.

This game includes many different weapons such as scepters, maces, axes, swords, bows, claws, daggers, staffs, wands, fishing poles and many more. There are also very rare items that have a very high value. Such rare weapons and items are especially sought after in the Hardcore Leagues in PoE. Each weapon has different weapon stats. Thus, there are particularly good weapon for melee fighters but also for long-range fighters. 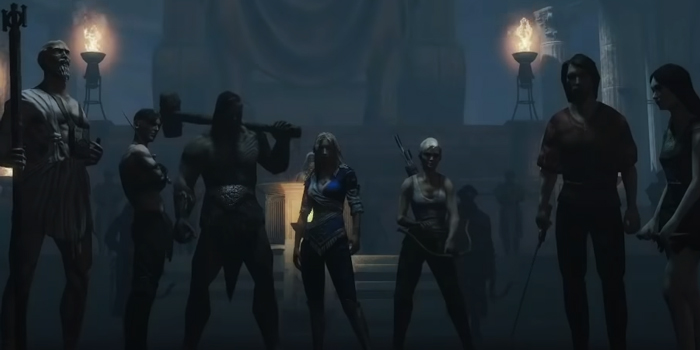 Similar to other action role-playing games such as Diablo 3, in PoE you’ll also have to defeat countless enemies. They will drop rare weapons or other items that will make you stronger and stronger. Among the rarest and strongest items are the Headhunter Belt and the Mirror of Kalandra. These two items are the most sought-after items in the game.

In the beginning you start on an island and start with the act called “The Awakening”. Right from the start, you are on your own and have to fight your way out. Once you finally reach level 2 and have raised your weapons, you are allowed to leave the island. From then on, your hero’s adventure on the continent of Wraeclast begins. Here you will have to defeat various opponents that are waiting for you.

By killing enemies and completing quests, your character’s level will increase. As you level up, you gain passive abilities that improve your offensive or defensive skills. With the different currency in the game, you can create various high-end armors. When you defeat the bosses of Path of Exile, you will receive parts from a collection of item sets. These can change your abilities or give you cosmetic effects.

What classes can I play in Path of Exile?

There are several archetypes you can choose from. The Marauder, for example, is good at dealing damage. He is good at dealing great physical damage with weapons like axes or maces. If you prefer to use spells instead, the Witch class is recommended. You start with high intelligence but low strength and agility. As you level up, your stats will be adjusted. This way you can focus on casting spells or fighting. The decision is entirely up to you. Another base class is the Ranger, who does a lot of elemental damage with his bow and arrow.

The Duelist is also a good choice for those who want to use more than one attack at a time. He has high strength and agility. Unfortunately, however, a low intelligence and only average health points. If you choose the duelist, you’ll have to rely on both physical and elemental attacks. At the same time, your skills with weapons like swords or axes are unsurpassed. If you’ve ever played a Diablo game, you probably know the three main attributes. These include strength, agility, and intelligence. Each class has different stats at the beginning. So you can’t just pick what you like. You have to choose a class that matches your playstyle.

When you finally reach level 10, you will be granted access to the ascendancy classes. You can choose from three main classes (Marauder, Witch or Ranger).After you complete the quests for each different subclass, you’ll receive one to all attribute as a reward. This is specific to each of the respective subclasses. For example, if you have completed the Berserker quest, you will get access to the Berserker Rage. This powerful spell increases your attack and movement speed by 50%. However, it will consume all your mana. So use this spell wisely. How does the PoE Currency work?

There are different types of in-game currency in Path of Exile: Exalted Orb and Chaos Orb are the default currency. You can farm these currencies yourself, but it takes a lot of time.

There are also many other currency you can use in PoE:

So you want to get these currencies without the effort of farming? Then buy poe currency and enjoy the advantage of these orbs. All this without much effort.

Dungeons in Path of Exile

The dungeons in PoE are different from traditional action role-playing games. That is because there are no random monsters or random dungeons in the game. All dungeons are designed by the developers down to the smallest detail. The dungeons are also not designed for quick leveling, but contain powerful bosses. These give you good rewards after you defeat them.

Fishing in Path of Exile

It is possible to fish in Path of Exile. However, before you can start, you’ll have to get a fishing rod. You can get it by opening crates or by killing monsters. To increase your chances of catching fish, you can use a rot head talisman. This talisman increases your chance of a catch by 30-40%. These talisman can be trade for a other poe currency.

We have aroused your interest and you want to buy or trade PoE Currency now? Then just have a look around on the website. You will surely find something.

You can play PoE on these platforms:

You can also play PoE on next-gen consoles like PS5 and Xbox Series X. The game state will not be lost. So you can continue playing on your new console with no worries.

Where to buy PoE Currency?
You can buy the PoE currency on various sites like CoinLooting. You will meet the in-game with the trader after just a few minutes and he will hand over the orbs to you. This is a simple and straightforward way to obtain PoE Currency.