There are so many terms in rocket league i couldn’t possibly name every one, but these are the main ones you need to know if you’re just starting.

Or just a 50, is when two players are trying to force it past each other with pure power by flipping into it.

When someone says they’re „in net“ that just means they’re defending from inside the goal. The net means the goal.

A wave dash is where you flip just as your back wheels are hitting the ground and it gives you an extra speed boost.

An aerial is when you use your boost to fly up to the ball. Almost anyone has the ability to do this by just jumping, leaning back and boosting. But it takes hundreds of hours of practice to make it efficient and precise.

A pinch is where you take your car and you smash the ball between you and another surface. It could be a wall or the ground on the other side or it could be off another player or the ceiling but that’s really advanced. You can get some crazy power with this if you time it just right.

Making a read is basically just trying to see where exactly the ball is going to bounce next off of a player or a surface. Usually when you tell your team you’re reading that just means you’re gonna go  for the ball next.

A demo is short for demolition and it’s when you blow someone up and they respawn after three seconds. You have to be going supersonic speed in order for them to blow up though, which is when you have that trail behind your wheels. This means you could be chasing someone at max speed and just barely reach the bumper of their car and they’re gonna blow up. But if you’re going slightly beneath max speed and you totally sideswipe them it’ll only count as a bump even though it seems like that would do more damage. 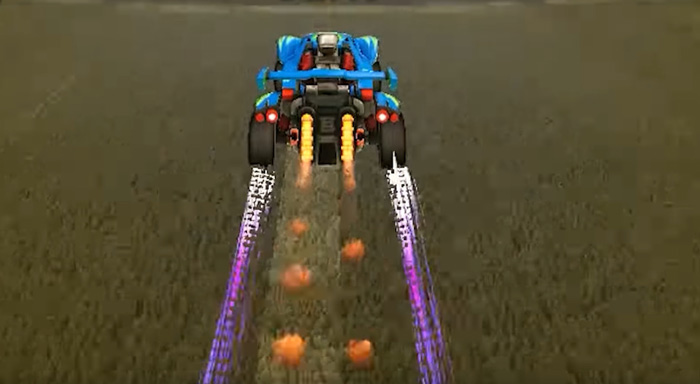 A challenge or contest or push are all the same terms in rocket league. It’s basically when someone else has  possession and you’re driving up to them from the front to disrupt their control.

Cheating means you’re creeping up on the play to try and follow it up. Usually if a 50 50 is about to happen and i’m near the play, i’ll try and cheat by creeping up near it to follow it up immediately after the 50 happens. This is also a really common strategy to use on kickoffs.

Dribbling is when you have the ball on your car and you’re making small adjustments to move it  around. Technically when you’re getting multiple touches as it’s rolling on the ground, that’s also called dribbling. But most of the time when people are talking about it, they’re referring to when you have it on top of your car. 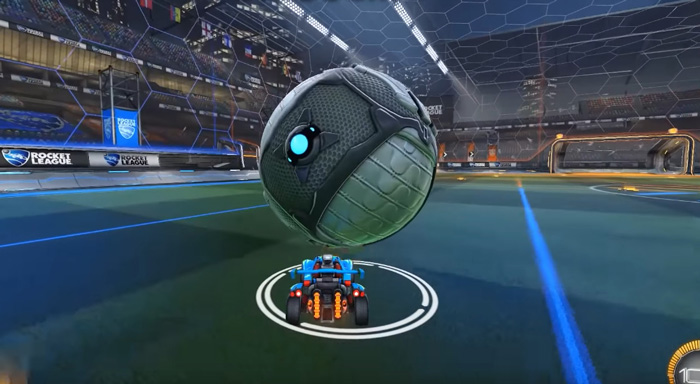 A catch is when the ball is falling down from the air and it lands on your car and you start dribbling. It helps to line your car up with the white circle on the ground for this.

A flick is when you’re dribbling with the ball on your car and you flip in a particular way to launch it away and you can get some crazy power. This is one of my favorite mechanics in the game.

A fake is when you look like you’re going to hit the ball but you end up just not hitting at all and the opponent goes flying past it. Some people like to tell the opponents they faked it when they just genuinely missed. This is also known as the funniest and most original rocket league joke of all time.

A dunk is kind of like a 50-50 except one player is getting there later than the first and they still end  up winning it and sending it past them.

A clear is when you get the ball out of the danger zone in front of your net. It’s usually just one solid hit that gets it out when a team is putting on a lot of pressure. That basically means they’ve been on  offense for a while and it’s only a matter of time before the defense runs out of boost and gets scored on.

A redirect is when you’re on the opponent’s half and a teammate passes it up to you and you simply redirect the trajectory towards the goal. Sometimes it’s in the air and sometimes it’s on the ground. If you’re really advanced, sometimes you can do it off the backboard.

A doink is pretty much a redirect where you single jump right as the ball is about to land on you. It’s kind of something you just get a feel for but it’s really satisfying when you score one.

A half flip is this weird flip thing that helps you turn around with momentum so much faster. It’s definitely important to learn.

A double touch is when you hit the ball off the backboard and then again into the goal all in one aerial. These are really tough to read on defense.

An air dribble is where you carry the ball in the air by getting multiple touches on it. It’s really hard to do if you’re just starting out, so i wouldn’t worry too much about it. But it’s nice to know what it is.

A ceiling shot is where you drive up the wall to the ceiling and you let your wheels fall off and you flip into the ball. Since you fell off of the surface instead of jumping off, you actually have your flip  infinitely. Usually when you jump from the ground you have to use your flip within 1.5 seconds after jumping or you won’t get to use it at all. But if you fall off a surface, that 1.5 second timer doesn’t exist and you can use your flip at any point. That’s what makes the ceiling shot so tough to save, but then again this is a more advanced mechanic that you probably won’t need to learn for a while.

A flip reset is where you actually use the ball as that surface to get your flip off of. It works the same way. You land on the ball from underneath and you use your flip to hit the ball. It’s one of the most difficult things to pull off but also one of the most difficult to defend. This is something you probably  won’t actually use competitively until you’re in like the top one percent of players, but you should know about it anyway.

Freestyling in rocket league is pretty much a combination of the last four terms we covered.

Those are all my general terms in rocket league. There’s so much more that goes into rocket league that i probably couldn’t cover entirely but these are the main ones you need to know.