The walk through Dalaran – WotLK Classic

The walk through Dalaran – WotLK Classic

Welcome to Dalaran, the capital of the magic from WotLK. Everything you ever dared to dream – here it comes true. Long ago, this mighty city was located in the Hillsbrad Foothills. Even then, Dalaran was considered the center of magic. Although Dalaran is considered the smallest nation of humans in Wrath of the Lich King (WotLK). This city is ruled by the most powerful wizards in Azeroth. However, this city also has a sad past. Arthas stormed this city under the control of Kel’ Thuzad during the third great war in Warcraft history. The mission was to summon the leader of the Burning Legion, Archimonde. He succeeded in doing so. In the process, Archimonde destroyed a very large part of the city. After this incident, the council of mages decided to take their city to safety. They cast a powerful spell that would keep all enemies away.

Those who have already played Warcraft 3 know that both the Horde and the Alliance have traveled to the new continent of Northrend. The reasons for this journey were different. But not only these two factions have made a journey to the icy Northrend, also the mages of the Krinin Tor. They were looking for a safe place for their hometown. Meanwhile, Dalaran has also been completely rebuilt, restoring it to its former glory. The Crystalsong Forest was chosen as the perfect location. However, in order to protect themselves even better from enemies or unwelcome visitors, a powerful spell was used.

This spell still causes Dalaran to float in the air to this day. Relatively quickly, the Alliance and Horde found themselves there, and Dalaran was declared a neutral base. The Kirin Tor knew that only the combined forces of the Horde and Alliance could stand against the forces of the Light King. You can get to Dalaran for the first time with the help of a flying mount or a warlock. Otherwise, you can simply ask a mage to provide you with a portal. If not, you will get access later in the game.

Welcome to the floating city

Don’t be fooled by the impression that Dalaran is a small city. We’ll show you how to find your way around this city. Due to the fact that both the Horde and the Alliance have a base, Dalaran is divided into three areas. The Horde and Alliance area along with a neutral area that both factions can enter. Through the trade district, you can get to the class trainer. So you don’t have to go back to Stormwind or Orgrimmar to learn new skills. Unfortunately, there is only one auction house for engineers in Dalaran. Everyone else has to return to their capital city. There are also two banks in Dalaran. One in the northern part near the Horde quarter and one in the southern part near the Alliance quarter. However, both banks are open to both factions.

The special sights in WotLK Dalaran

Dalaran is a city rich in history with many different sights. For example, in the northern part of the city you will find a statue in honor of the fallen magician Antonidas. You will also find another monument directly at the fountain of the city. The most remarkable building of the city is the Violet Citadel. You can see this huge tower from far away. There you will find the most powerful wizards of the Kirin Tor. Among them you will find Rohnin. He is also known for his nickname Dragonheart and is one of the most powerful mages.

You can also meet some familiar faces from the current WoW expansion. You will also find Nathanos Blightcaller in Dalaran, who will play a very important role later on. So if you want to look around a bit, you will find numerous historical and famous heroes from Azeroth who have found their way to Dalaran. 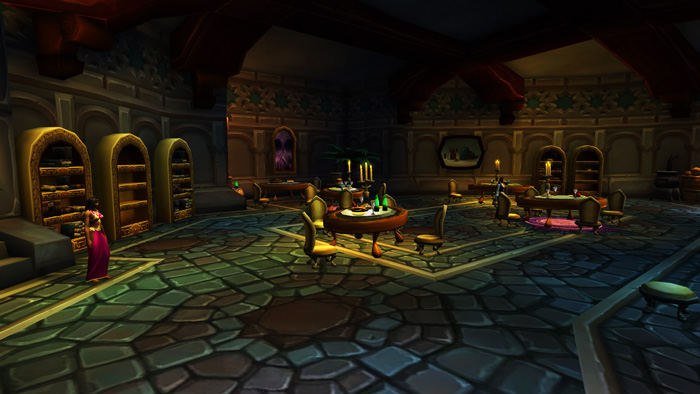 The different shopping possibilities in Dalaran

Besides many small stores selling various armor or other items, you will also find mount and pet traders in Dalaran. Right next to the entrance to the flight master, the merchant Mei Francis is standing outside her store. She offers you different mounts. By far the most useful mount, however, is the mount, Reins of the Traveler’s Tundra Mammoth. It is a mammoth with two sellers on it. So you can easily repair your items on the way, sell them or buy food and drink. If your shoes have become dirty from the long walks, you can have them polished for free in the store Threads of Fate. Just sit on the chair and Sheddle Glossgleam will take care of you and your shoes.

If you are a toy enthusiast, we recommend a visit to the store “The Wonderworks”. There you will find a wide variety of toys, such as the famous “Toy Train Set” or even various pets. The retailer Jepetto Joybuzz will also have the right toy for you.

In Dalaran, countless daily quests await you in WotLK, where you can fill your gold pouch a bit. The inhabitants of Dalaran need your help. For example, you have to bring various fish from Northrend to the city’s fisherman. There are also numerous tasks waiting for you in the Violet Fortress. As soon as it gets dark in Dalaran, you can watch a little gnome named Windle Sparkshine. He walks the streets and alleys of Dalaran at night and lights the street lamps. Once he is done with that, he disappears again. If you want to help him with his work or if he has forgotten a lantern, you can buy “Windle’s Lighter”. You can then use it to light the lanterns in Dalaran.

The underground of Dalaran

If you think that only rats live in the underground of Dalaran, you are wrong. There is another whole district in the sewers. The easiest way into the sewers is via the well at the bank in the direction of the Horde district. Just jump into the well and you’ll find yourself in the Dalaran Sewers in WotLK. Alternatively, you can simply enter the sewers through the opening under the Purple Citadel. Another secret way is via the protruding pipe under Dalaran. However, you can only reach this entrance with a flying mount. You can find out what strange creatures will be waiting for you there in the next section. In the sewer you’ll find your own inn, where you’ll meet some scary characters. Next to it you will also find your own bank. You can then reach the center of the sewer via a pipe. There you will find a duel platform where you can compete against other players. If you look around you will find a secret meeting of a rat and four turtles. The turtles look up attentively at the rat. This is probably also meant to allude to the Teenage Mutant Ninja Turtles. Not far away, there is the black market. There you can buy rare but also overpriced items.

You will also find small green bottles everywhere in the sewers. If you are brave enough, you can drink them. When you drink this Underbelly Elixir, three different effects can occur. You turn into a wasp and can then fly all over Dalaran. Or you can turn into a Tuskarr. This increases a fishing skill a bit. You can also get a bad trip and suddenly see only mages of the Kirin Tor everywhere. But don’t worry, after a few minutes this effect will disappear by itself.