As a protection warrior, you are the tank for all cases in WotLK Classic. And therefore often in great demand, since there is still a lack of tanks everywhere. However, in this WoW WotLK Classic Protection Warrior (Tank) Guide we will show you how you can still have fun as a tank in raids or dungeons (PvE). 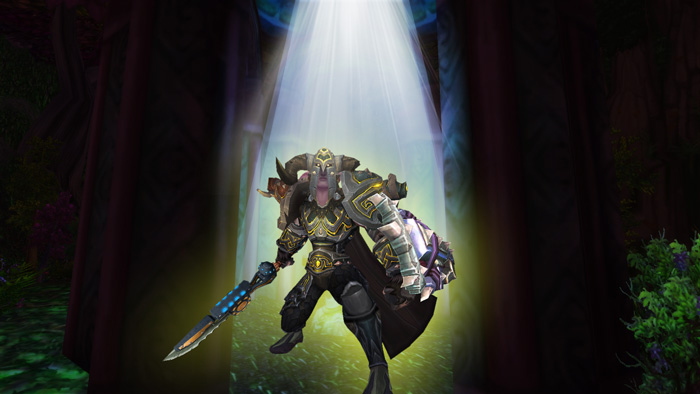 As a tank, it’s always your job to keep the damage away from the rest of your party. You do this by keeping the attention, i.e. the threat of the opponents (also called aggro) on you. There are two types of tanks in a raid. The group tank and the boss tank. But don’t worry, we’ll show you how not to break a sweat in this Protection Warrior Tank PvE Guide for WotLK Classic.

How to pull correctly

At the beginning of every fight there is a pull, that is the moment when the group (usually by the tank) starts the fight. If you are attacking several targets, it is best to rush into the middle of the group. In this way, you have all opponents directly in attack range. Thanks to the talent “Warbringer” you can also use the Charge in the defensive stance as a protection warrior. You can bind targets that are standing away from you with Heroic Throw. You can also silence targets that use magic attacks, which forces them into close combat. If you’re up against ranged fighters, try to lure them in with a ranged attack or taunt and immediately disappear around the next corner. Without a direct line of sight, enemies will run after you around the corner, where you can welcome them with open arms.

Before pulling, you have to make sure that there are no patrolling enemies nearby. Otherwise, they may “add” to the fight, which can be quite dangerous depending on the group. You always attack bosses with an Charge. With a little practice, you can even apply a Heroic Throw just before. This increases the starting threat on the enemy. Just use the time when the weapon flies to the boss to storm off. So, if you already follow this first step of the WoW WotLK Classic Protection Warrior Tank PvE Guide, then you have already mastered the most difficult part.

A good positional game is an important basis for a good tank. In this section of the WotLK Classic Protection Warrior Tank Guide, we will show you exactly what you need to keep in mind. The prerequisite for doing this is that you know the abilities of the enemies, no matter if boss or normal mobs. Which mobs attack from a distance, which have a Cleave effect and which enemies strike out to the back? Even though you may very well run wildly back and forth while puling. A good tank will always try to keep the finesse to a minimum in the area to make it as easy as possible for the damage dealers. Also, always make sure to never turn your vulnerable back to the enemies. Most of your defensive attributes, such as parrying and blocking, only work when you are facing the enemies.

Magically talented villains can be fueled to a certain degree by using the Spell Reflection ability. You can easily deal with the threat created by the healer, but if a damage dealer pounces on the target, it won’t be enough. If you have to deal with enemies that hurl you through the air, you have to stand with your back to the wall. If this is not possible, simply use Charge or Intercept in flight to immediately rejoin the fight.

The Threat Buildup as a Protection Warrior in WotLK Classic

You can track your own threat against your group very well by using the Omen addon. For many damage dealers, a good tank is still the one who never loses the threat. That’s a bit one-dimensional, but still: your aggro build has to be right. You can learn how to use your abilities most effectively for this purpose in the section “the right use of your abilities”. It is very important that you keep an overview in every situation. In case a player “pulls aggro”, you have to be able to react quickly. The same applies to the case of an incoming enemy group. If all else fails, a sticky situation can be quickly defused with a Challenging Shout, followed by area attacks such as Thunder Clap and Shockwave.

How to use Vigilance correctly

Vigilance is an integral part of a Warrior Tank’s threat build. It is therefore important to give this ability to the right player. Again, the Omen addon helps here. So check the table to see who is building the biggest threat. That person is usually a good candidate to receive the buff. Pro tanks even redistribute vigilance during combat and adjust to the changing threat level if necessary. In addition, there are some classes that especially enjoy vigilance. Damage Warrior, Balance Druid or Death Knight do not have any active aggro reduction option.

The most important stats for a Protection (Tank) Warrior

As a tank, you need to keep some numbers in mind when putting your gear together.

In this WoW WotLK Classic Protection Warrior (Tank) PvE Guide, we will continue with the focus targets and what you should keep in mind. As a tank, you have the responsibility for the group. You’re expected to set the pace and mark the order of targets. Although most heroic instances are hardly difficult nowadays, it’s worth assigning the focus target here as well. You’ll also get through the instances faster that way.

You can do a lot with 71 talent points. In this section of the WoW WotLK Classic Protection Warrior (Tank) – PvE Guide you will learn which talents are worth investing in. In order to be able to take care of your companions as a tank, you have to invest a large part of your points in the protection tree.

The Warrior is the only tank that can permanently transfer threat from another player to himself. So this ability is very powerful.

The end talent in the protection tree hits multiple targets at once. In doing so, it creates excellent threat and stuns the opponents additionally. But be careful. Due to the cone-shaped area of effect, you can easily miss nearby enemies. So wait shortly after the pull and bridge the time with Thunder Clap until all enemies are in front of you. Only then should you use Shockwave. The best Glyphs for the Protection Warrior in WotLK Classic

This WoW WotLK Classic Protection Warrior (Tank) – PvE Guide continues with the best glyphs that you should definitely have. There is a rich selection of glyphs that are useful for a protection warrior. We recommend the following for certain situations.

With this glyph you won’t go wrong in any situation. It increases your block value by ten percent after a Shield Slam. This probably affects the damage of the Shield Slam as well as the blocked damage, so it boosts offense and defense at the same time.

If you’re not doing so well with threat building, this glyph is well worth a look. It helps to bring the important debuff “Sunder Armor” on the opponent faster by Devastate. It can also give you a small advantage in fights that demand everything from the damage dealer.

If you’re exclusively in 5-man instances and need to tank a lot of enemies, feel free to give this glyph a try. Hitting an additional target with Cleave makes threat building easier and deals even more damage.

Glyphs for the Raid

For normal use, this glyph is completely unimportant. However, in battles where there are regular tank changes via spot, this glyph can be crucial. Some tanks even carry this glyph especially for these cases and change it as needed.

Here we recommend the Glyph of Thunder Clap. The Glyph of Command is also worthwhile, at least if you have to use Commanding Shout yourself. The third glyph slot is for Charge. You’ll notice the five-meter range increase when you’re popping it.

You won’t get by with two buttons for a long time with the Protection Warrior. If you want to effectively bind enemies to you, you have to react quickly and know the right sequence of abilities. The optimal threat only exists when the keys are smoking. In this section of the WotLK Classic Protection Warrior (Tank) Guide, we will show you which abilities are very important and how to use them.

How to tank an enemy or a boss

Shield Slam is your strongest threat creator, which you should always use as soon as it is ready. If Revenge is not ready afterwards, replace it with Devastate. Once you get a Sword and Board procc, you can use Shield Slam and start the rotation over again. If you want to use a Demoralizing Shout or a Thunder Clap, you can ideally do it at the end of the rotation. Heroic Strike is used whenever you have more rage than you can use in the rotation. Usually this is at 30 excess rage. Set Shield Block to increase the damage of your Shield Slam and add additional threat. You also use Shockwave and Concussive Blow, although the bosses are immune to the stun effects. Both abilities still generate a high level of threat.

How to tank multiple enemies at once

Whether you use Shockwave immediately or a Thunderclap first and then Shockwave depends on whether you can immediately catch all enemies and bind them in front of you. Another reason might be that you want to take a hit from mobs beforehand to have enough rage for the rotation. The advantage of the Shockwave/Thunder Clap combo is that you build up a lot of threat with it before the group even really gets going. Cleave has the same role in the rotation as Heroic Strike against single enemies. Especially if you have the Cleave glyph, you can easily skip a Devastate to use Cleave on every auto-attack. For both Cleave and attacks that affect a single target in the group, it’s most effective if you change the target often. Especially even if the damage assists do a tremendous amount of area damage.

Here you can also use Shield Block. Against many opponents, this ability is even stronger, because many individual blows are blocked by increasing the block chance.

Now, as you have learned from this WoW WotLK Classic Protection Warrior (Tank) PvE Guide, it is not even that hard to play a Tank Warrior. Especially if you follow the rotation and skills we showed you above. So if you play a warrior, you should definitely try playing as a tank warrior. This can be a lot of fun, and you’ll be taking on one of the most important roles in any raid. If you liked this guide, please share it with your friends or give it a like.