Admin2022-09-05T13:14:36+02:00
By Admin Guides and News, WoW: Wrath of the Lich King Classic Guides 0 Comments Like: 1
WotLK Classic Krieger Level Guide Verbergen
1 Leveling as a Warrior in WotLK Classic
1.1 Point 1 – The right preparation
1.2 Point 2 – First steps
1.3 Point 3 – Level 10 go to the city, this is how you level your warrior quickly in WotLK Classic
1.4 Point 4 – Till the doctor comes
1.5 Point 5 – Weapons and equipment
1.6 Point 6 – Dual talent specialization and the agony of choice
1.7 Point 7 – Glyphs
2 The most important abilities when leveling your warrior in WotLK Classic
2.1 Dealing with rage – useful macro
2.2 Heroic Strike and Cleave
2.3 The ability Victory Rush
2.4 Execute, but quickly
2.5 The correct warrior level talent point distribution for WoW WotLK Classic

With heavy armor and a lot of rage in his belly, the warrior rushes towards the maximum level 80. In this WoW WotLK Classic Warrior Level Guide, we’ll show you how to get to level 80 as quickly and comfortably as possible. Leveling as a Warrior in WotLK Classic

Before you can start your career as a warrior, you have to choose a race. You can choose warriors from almost all races. Only the blood elves are an exception. If you want to optimize your warrior for your later role, we recommend the tank as your choice of role. On the Alliance side the Night Elf is a good choice and on the Horde side the tough Tauren. Orcs and Draenei have a slight advantage as damage dealers. Our tip: It’s better to choose a race that suits you. After all, you will spend a lot of time with your warrior in WotLK Classic.

In this section of the WoW WotLK Classic Warrior Level Guide, we will discuss the proper preparation for the leveling phase. If your warrior is your first character, then you can skip this point and go directly to point 2. If, on the other hand, you already have a character at level 80, then all the better. A little preparation will make playing a Tiwnk much easier. Every fresh character is happy about healing potions, four spacious bags and some gold. However, you should pay special attention to the account-bound equipment, so-called heirlooms. You can get them in Dalaran for Emblems of Triumph or at Wintergrasp for Stone Keeper’s Shard. Heirlooms can be sent to another character by mail.  The values also increase with the level increase. Until Northrend, these usually represent the best you can equip.

Shoulder pieces and chest armor each provide a ten percent bonus on experience received. You should definitely not miss out on this. Warriors in particular will also enjoy the “Bloodied Arcanite Reaper“. But it doesn’t necessarily have to be an axe. The Reforged Truesilver Champion from Wintergrasp is a more than viable alternative. Add a Crusader Enchantment and you’ll really put the fear of God into your enemies. But what are the first steps I need to take when leveling as a warrior? We will explain this in the next section of the WoW WotLK Classic Warrior Level Guide.

Once you have chosen a faction and a race, your warrior will start in the starting area. However, he does not look heroic yet. But don’t let that scare you off. You will manage the first levels without any problems thanks to Charge, Rend and Heroic Strike. Familiarize yourself with these abilities and the functioning of your resource Rage. They will also be the basis of your warrior existence later on. Don’t forget to visit the warrior class trainer regularly at the beginning of each level (2, 4, 6, etc.). This will soon fill up your skill bar.

If you have bequeathed heirlooms to your warrior (see point 1), you can now take them out of the mailbox. If you need to take a break or even go offline, place your character in an inn or in the capitals. There your warrior can rest and get a bonus of experience points. We also recommend Questhelper as a useful add-on.

Point 3 – Level 10 go to the city, this is how you level your warrior quickly in WotLK Classic

At level 10, you’ll visit the first capital. Here you’ll immediately seek out the weapons trainer and learn how to use other weapons (such as two-handed maces, bows, etc.). Of course, you won’t use ranged weapons, but they will give you important bonuses. In the capital you also have to choose a profession. First aid is obligatory. Here you can turn your cloth into valuable bandages. For the main professions, you can choose a collecting profession to advance quickly. Processing professions often require a lot of gold and time and are better learned at the maximum level 80. Herbalism is especially interesting for warriors. You will almost inevitably stumble across the valuable green stuff while questing and it can be sold for profit. From skill level 75, you also get an additional opportunity to heal yourself with the profession skill Lifeblood.

Also from level 10, you can distribute your first talent point. The Fury tree is the best way to quickly level up. The first point goes immediately into Cruelty. A complete talent distribution can be found in one of the lower sections of this WoW WotLK Classic Warrior Level Guide.

Point 4 – Till the doctor comes

By now you’ll have noticed that while warriors can deal and take a lot of punishment, effective healing is not part of their skill repertoire. So you’ll have to help yourself in some other way. To refill your life bar after battles, you should always have some food with you. You can find the appropriate food for your level by slaying enemies or visiting inns. While fighting, you should always have a bandage at hand. Together with healing potions you will prevent a pleasant demise. However, you should not become overconfident. In the beginning, you should only attract the attention of two or three enemies at the same time.

A word about equipment: if you don’t have an heirloom weapon, you should always try to wield a weapon with as much damage as possible. More damage means faster death of your enemies. This also means faster quest completion and significantly more time saved on the way to level 80. Two one-handed weapons generate rage a bit faster here, but are ultimately significantly behind the important two-handed weapons in damage. So only use one-handed weapons if you can’t find anything better. When leveling your armor, you should mainly pay attention to attributes such as strength, attack power, and critical hit rating. Even if your warrior can wear plate armor from level 40, you should not underestimate Mail Armor. Especially if it has the right stats.

Point 6 – Dual talent specialization and the agony of choice

In this section of the WoW WotLK Classic Warrior Level Guide we will show you why the Dual Talent Specialization is so important. If you’ve enjoyed the role of a tank up to level 40, you have exactly two options. Either you reset your talent points and continue to roam the world as a protection warrior. Or you invest 1.000 gold in the dual talent distribution. This is a very good investment. At max level and in the high-level raids, dual talent distribution is more the rule than the exception these days.

As early as level 15, you will have noticed a new box under your talent tree. The Glyphs of Inscriptionists improve individual abilities and cooldowns of each class. Of course, if you’re an aspiring warrior, you won’t be without them. However, to level up, you will use completely different glyphs than your level 80 colleagues. We have listed the most important glyphs below.

The most important abilities when leveling your warrior in WotLK Classic

After giving you a brief introduction to the topic, we will now go into this WoW WotLK Classic Warrior Level Guide, on the most important abilities for your warrior. 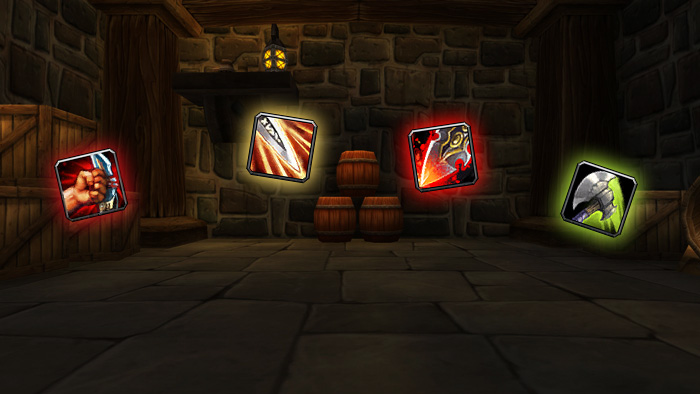 Rage is the fuel that powers the warrior. Unlike mana, this resource can’t be easily replenished in emergency situations. In order to do this, you must first fight for a while. Each attack you make and each hit you suffer will cause the red bar to rise. The Charge Attack ability lets the warrior get really angry right at the beginning of the fight. Unfortunately, it is not available in our recommended Berserker stance. Tricky warriors therefore start a fight in the Battle Stance and only switch to the Berserk Stance after the onslaught. A simple macro helps to switch the stance and attack directly.

Outside of a fight, rage unfortunately dissipates quickly. Warriors are therefore well advised to attack enemies close together, so that the next fight starts with a surplus of rage. At higher levels, the rage bar should never drop so low that available main attacks, such as Whirlwind, cannot be used.

How important these attacks are and when you should use them, we tell you in this section of the WoW WotLK Classic Warrior Level Guide. Sometimes warriors just have too much rage in their belly. A filled rage bar that doesn’t want to go down shows that some damage is being wasted here. This is where the Heroic Strike and Cleave abilities come into play. Both convert the warrior’s next automatic attack into a special attack that consumes rage instead of generating rage. While Heroic Strike generates additional threat and is especially interesting in the role of a tank, Cleave affects multiple enemies at once. Excess rage is effectively converted into additional damage. Use these abilities if your warrior has collected too much rage that you can’t get rid of.

This underrated attack is really very valuable on the way to level 80. It can be used as an additional instant attack after each enemy is killed. It doesn’t cost any rage and causes a lot of damage. Especially against quest opponents with low health, Victory Rush shows its full potential. In instances, however, the attack loses a lot of its importance.

Execute was once a talent that conjured up nice numbers on the screen and left the warrior without rage afterwards. Today it’s different. Execute costs a maximum of 30 rage points and can only be triggered when the target’s health has dropped below 20 percent. During leveling, execute used at the right time gives a noticeable speed boost. A normal enemy will hardly survive more than one execute. Especially in instances and against bosses, however, several executions in a row make your own damage numbers skyrocket. 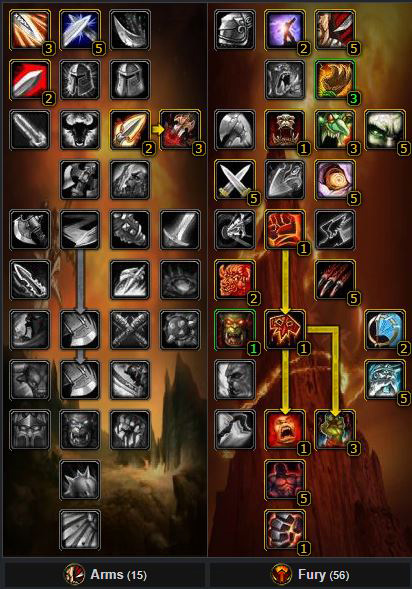