New World is the home to plenty of difficult trade skills, however, one of the hardest crafting trade skills to level up is the Arcana. The materials needed for it are easy to attain from gathering trade skills, yet to be most efficient, you will require a particular set of items.

One of the biggest challenges in the New World is to learn the process of leveling up the Arcana. We have spent 12+ dedicated hours in collecting the needed resources, then figured out the quickest way to upgrade the Arcana skill. In this article, we will comprehensively guide you to level up your Arcana in the quickest way possible.

What is Arcana Crafting?

In the most recent update of the New World, Arcana was added as a new class of the crafting tree. It includes both alchemy and magic.

Adding more levels to your Arcana skills will enable you to craft unique weapons based on intelligence. It includes ice gauntlets, staves, Wisps, Motes, and potions. More Arcana levels will allow you to make a whole new class of potions, which will surely get you high profits. The reason behind the profit is that in the current game meta only combat potions are used, so these new potions will surely get you an edge over your competitors. This article will primarily focus on gathering guides since it makes acquiring resources a lot easier to level up the Arcana. We focused on upgrading the harvesting guides first, through which we gained over hundreds of Motes and Tier 2 Reagents. We also collected over 295 Rivercress Stems as well as 110 Blightroot Stems. The harvesting route will also get you hundreds of Fronded Petalcap, Tanglewisps, and oil.

After the harvesting route, we focused on upgrading our mining skills, since herbs are not enough to level up Arcana skills and got plenty of mining materials. It enabled us to gather Seeping Stones and Iron Veins which are crucial in getting more resources. Here is a list of the necessary materials that are required. We have also given a general mention of the quantities you require so that you have a general idea of the number of resources you need to level up the Arcana:

Looking at the list gives us a perspective that even though it is quite hard to level up the Arcana, yet it is quite easy to gain the resources. It also requires skinning, harvesting, mining, and fishing resources.

You must pick a solid location where you will do the crafting. The reason behind it is that in the New Word, your storage area is separated from all the settlements. So might have resources distributed in Windsward, Everfall, and Monarch’s Bluff, making it impossible to utilize them. Another factor that comes into play is that not all your settlements can upgrade to Arcane Repository Tier 3+. You will need this tier to upgrade your Arcana skill from 60+. However, if you are in a situation that your major resources are in an area where there is no chance of gaining Arcane Repository Tier 3. Then you should spend some savings and purchase a house. This is the best solution if you have your materials in Windsward.

If you are near Everfall, a town where you can get an Arcane Repository Tier 3 then visit the town and set your respawn there. So now you can recall your place and to your Inn quite easily and make as many transfers as possible from one place to another in a matter of a few seconds.

In the end, you might raise eyebrows at the number of common focus potions. However, we had plenty of resources to get them. After crafting is finished, you will attain level 60 in Arcana. Looking at the entire list of crafts, you might have noticed that they are not granting high enough Arcana points, yet we still recommend this build so that you can use your Life Motes for later.

Arcana Skill 60 to the sky’s the limit

Arcana Skill 100 to the sky’s the limit 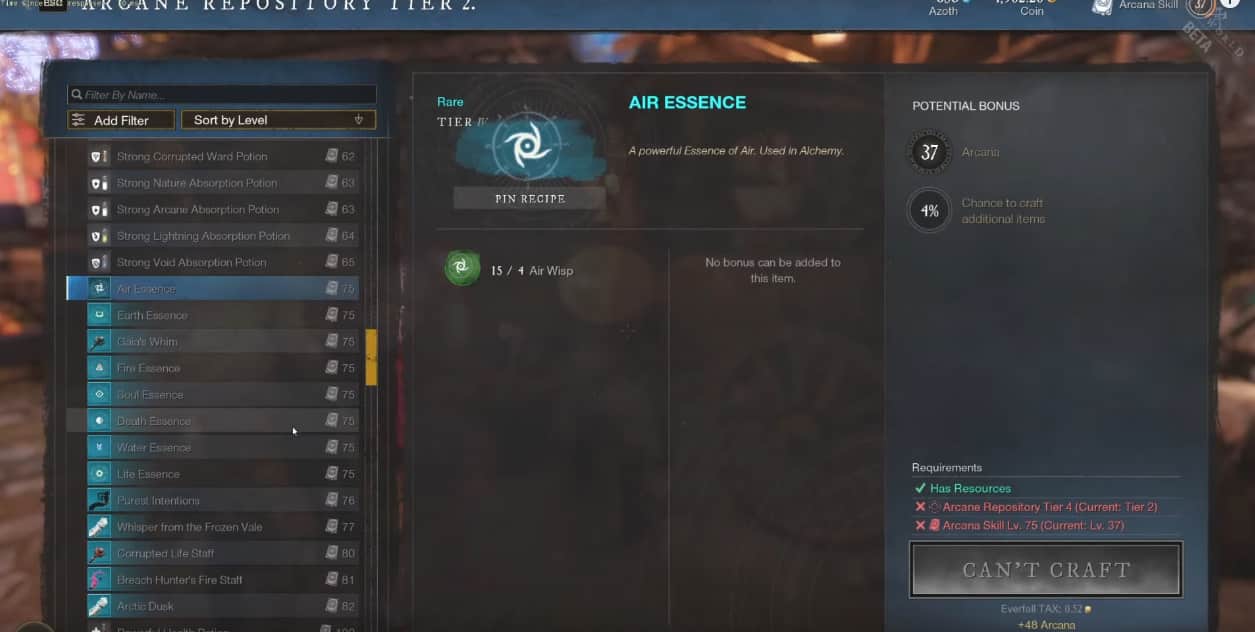 If you aim to speed up the process and get to the high level, you need to gather these resources. Then you should focus on upgrading your staff crafting by getting Starmetal Ingots. This will allow you to get 1725+ Arcana skills per craft.

Each craft will need Life Motes, Water Motes, and Coarse Leather. So, it is highly advised that upgrade your mining skills to the maximum since Starmetal is one of the rarest resources to find now.

Before you reach the target level, we will highly recommend you continue to alternate between gauntlets and staves. If you have the resources, you can also have a take at other crafts. If you are not clear, then you can also check the crafting page about the amount of Arcana you get from each craft.

You can save a decent amount of coins by getting a discount on taxes, but this tactic will only work for those who have their settlements. If you are amongst the lucky ones, then take as much advantage as you can. Also, keep in mind that Global luck will also play a key role in gaining additional crafting procs.

At Arcana level 25 you will unlock this crafting ability. But as mentioned you should avoid using it since you might be tempted to do so as you will have plenty of Elemental Motes in your arsenal.

If you plan to use this crafting for a particular quest, then you should go for it. However, avoid it as much as you can while upgrading your Arcana skill. Since you will need these Motes later as discussed above in our article. Try going for Death and Fire Motes. They have good recipes that you can use.

You should know that the Ice Gauntlet and Life Staff are quite efficient. And if you have other materials/resources then use them to your advantage and craft items that help you in gaining high Arcana skills.

Don’t Craft a lot of potions

It becomes quite difficult, but the potions lose their importance after exceeding a certain level. It is quite an unreasonable tactic at Arcana level 50 to craft Tier 2 potions. We crafted over 350 potions, but they didn’t make any impact. So, learning from our mistakes, avoid crafting potions and just go for gauntlets and staves.

Wisely pick the depositing location of your resources

As mentioned above, you should be quite attentive to the crafting levels of settlement. If your primary focus is leveling the Arcana, then we advise you to deposit all your items at a settlement where you can level your Arcane Repository to the max.

It will save you hours of effort from moving materials from one settlement to another. The same tactic can be used for other crafting skills, like Armoring, Weaponsmithing, and Cooking. But it is necessary to use this tip in Arcane leveling.

That is why we recommend you to do Arcana storage planning in New World quite strategically. Always try to think a couple of steps ahead so that you face as few barriers as possible.

Considering the above discussed Territorial Incentives, the ideal scenario will be for the player of the controlling faction since they can use Level 4 Arcane Repository, it will be the best place to max out Arcana skills. If you are not lucky, then opt for making deposits at a settlement owned by your faction. Be quick since ownership changes are quite frequent in settlements.